There is also an elderly woman in Vietnam who has not had a haircut in 64 years and now these hairs are up to 6 meters long like a big snake.

According to a report by Audit Central, 83-year-old Negio Thai Din, from Ben Tree Province, Vietnam, has not cut his hair since he was 19 years old.

He said he had never used shampoo in the last 64 years.

The Vietnamese woman quoted herself as saying that when she was 19, her parents cut her hair for the first time, after which she started having severe headaches.

Negio Thai said the symptoms persisted even after treatment. 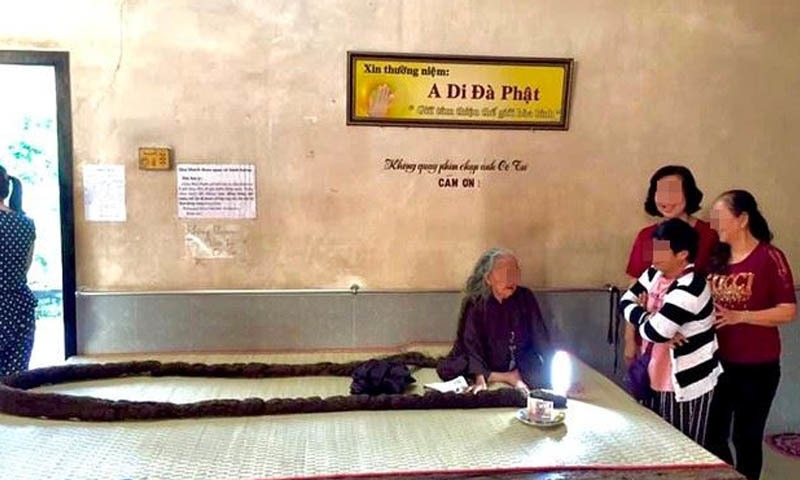 “When my hair started to grow, the pain gradually subsided and I have never had a haircut since,” he said.

He explained the reason for not washing his hair with shampoo or soap, that whenever he washed his hair, he would start having headaches again. Since then, I have not watered my hair.

The Vietnamese woman later applied for permanent residence in a Buddhist temple in 1990, which was granted.

She said she only eats vegetables once a year.

He thinks that if he is mentally and physically healthy at the age of 83, it is because of food.

Read more: Helpful tips to get rid of weak and full nails

According to experts, her hair grows at a rate of 10 cm per year, but based on her 6.1 meter long hair, she may never get the title of the woman with the largest hair in the world.

It should be noted that in 2018, a Ukrainian woman came forward who had not cut her hair for 28 years, after which her hair became longer than her height.

Elena Kravasenko, 33, from Ukraine, is a successful businesswoman and mother of 6-year-old twins.

The last time Elena had her hair cut when she was 5 years old was also forced by her parents. Since then she has been growing it and now she is 2 meters or 6 and a half feet tall.

“There is nothing more beautiful in the world than a woman with natural and long hair,” she says proudly.

The people voted for the beloved mayor even after the death

Romania: Villagers have elected their favorite mayor for the third time in local elections ten days after his death. The incident took place in the village of Davisello in southern Romania, when the people elected…
END_OF_DOCUMENT_TOKEN_TO_BE_REPLACED
0
0
0
Share
Interesting & Funny

In Australia, cows are trampling on koala bears

QUEENSLAND: Strange news has come from Australia that koala bears are facing the wrath of cows and they are crushing them to death. A University of Queensland PhD scholar has told Grand Chester that for…
END_OF_DOCUMENT_TOKEN_TO_BE_REPLACED
0
0
0
Share
Interesting & Funny

Mexico: There are large species of deadly and killer insects all over the world, also known as ‘Basin Bugs’. One such worm eats its prey and sticks its upper shell around its back. There are…
END_OF_DOCUMENT_TOKEN_TO_BE_REPLACED
0
0
0
Share