Karachi . At least 13 people were killed when a passenger van overturned on the Hyderabad Motorway

Karachi . At least 13 people were burnt to death and several others injured when a passenger van overturned on the Hyderabad Motorway (M9) within the limits of Nooriabad police station.

Additional IG Motorway Police Dr Aftab Pathan told Dawn that there were at least 20 people in the van and it crashed before the Lucky Cement Factory. 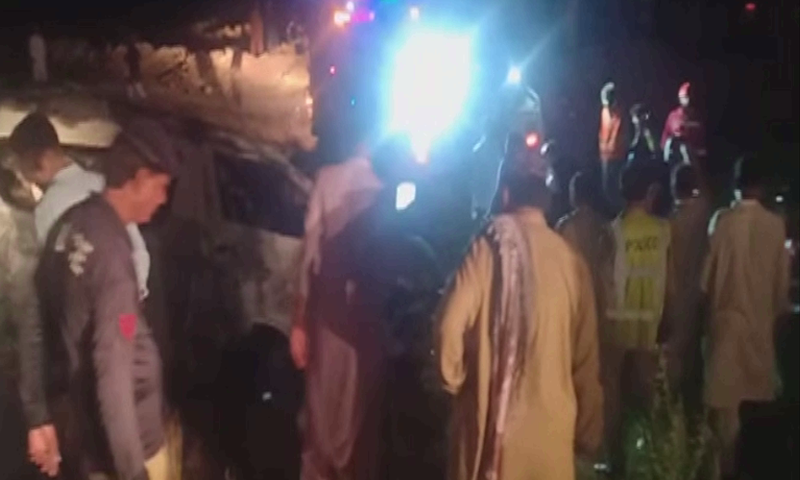 Five of the seven survivors have been taken to hospital, he said.

He said that 6 bodies have been recovered while the survivors include the van driver and the child.

Initially, the bodies could not be identified.

Dr. Aftab Pathan said that the driver said that he had applied the brakes after the bonnet of the vehicle in front of the van broke and collided with the van.

Nooriabad Deputy Superintendent of Police Nazar Dareshak said the van was traveling from Hyderabad to Karachi and the accident took place 63 miles from Hyderabad.

He said the van overturned and took several turns, after which it caught fire.

He said that the bodies have been burnt and turned black.

Edhi’s ambulances from Karachi and Edhi Home reached the spot while fire tenders were called for extinguishing the fire.

After the accident, the motorway police raided M9 Hyderabad. The Karachi section was closed due to which traffic was suspended.

It should be noted that due to poor condition of roads, dilapidated vehicles and negligence while driving, thousands of people are killed in traffic accidents in the country every year.

Earlier this year, six members of the same family, including four children, were killed and five others were seriously injured when a van caught fire in the New Karachi area.

Like Holocaust, anti-Islamic material should also be banned, Imran Khan's letter to Zuckerberg

If I had to talk to the British Prime Minister for the return of Nawaz Sharif, I will do it, Imran Khan

FATF decides to keep Pakistan on gray list till February

The Financial Action Task Force (FATF) has decided to keep Pakistan on the gray list till February 2021. The decision was announced by FATF President Marcus Player during a virtual press conference following a three-day…
END_OF_DOCUMENT_TOKEN_TO_BE_REPLACED
0
0
0
Share