The Corona virus that spread from Wuhan in China last December has reached around the world, causing the disease Covd 19 million more than 11,000 people sick and more than 13 thousand 4 hundred killed.

But in countries around the world where a large part of the population has been put in quarantine as a result of this global outbreak, air pollution has dropped dramatically.

Photographs by NASA in early March showed a significant reduction in air pollution as a result of this outbreak in China.

NASA scientists say the level of nitrogen dioxide (NO2) has dropped, emitting from gas vehicles, power plants and industrial centers.

Pictures of NASA and European Space Agency (ESA) pollution monitoring satellites were compared to the first 2 months of 2019 and 2 months of this year. 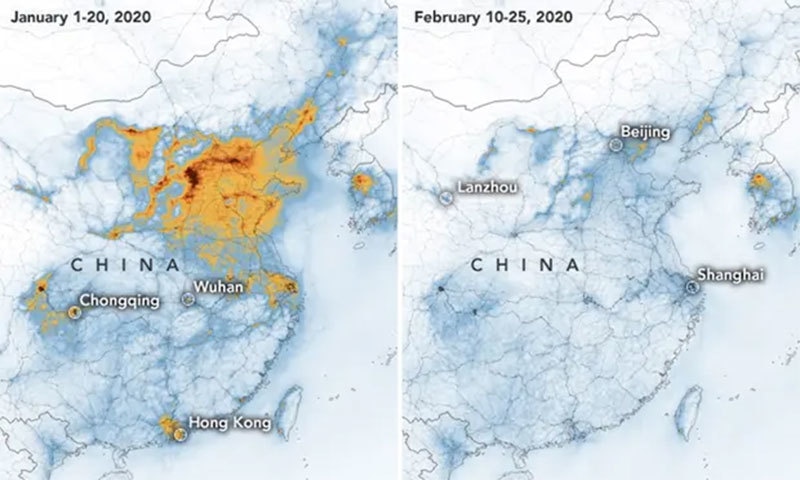 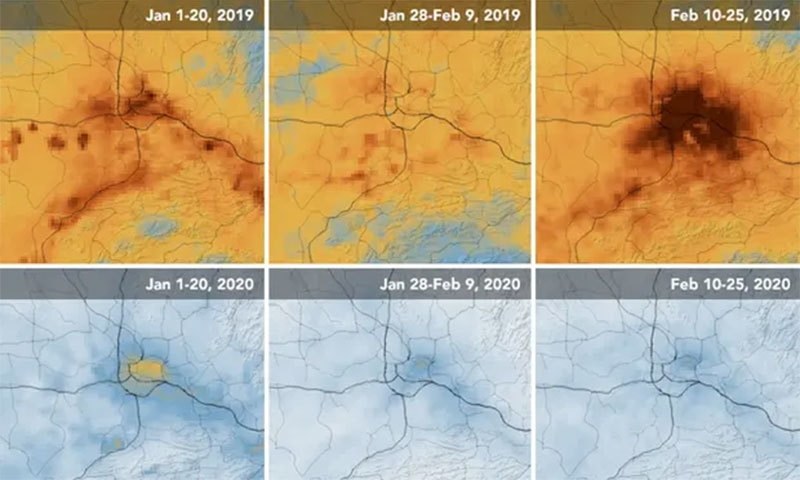 Photo courtesy of NASA
Now that the outbreak has been largely controlled in China, recent photos of the European Space Agency have once again shown an increase in NO2 emissions.

But other countries are seeing a significant reduction in air pollution.

In Venice, the water of the canals has become transparent without running boats, while in Thailand and Japan, monkeys and deer are wandering the streets that are now empty of tourists.

As the European Agency has seen a significant drop in pollution rates in northern Italy, the reason for this is to stop the area from spreading to Cody 19.

Similar changes have been seen in Barcelona and Madrid, where the Spanish administration banned people from their homes in mid-March.

Dramatic reduction
According to Winston Henry Povich of the EU’s Earth Surveillance Program, NO2 is short-lived air pollution, which lasts for up to a day at the air level.

As a result, the pollution stays close to the source of emissions, and can also be used to track the activity levels of different sectors, he told AFP.

“This is the first time I have seen such a dramatic decrease in pollution rates for a specific reason in such a large part of China,” Fai Liu, a NASA’s Goddard Space Flight Center expert, said.

During the economic downturn a decade ago, NO2 levels dropped but not so much.

Winston Henry Povich said that the level of NO2 in northern Italy is almost gone.

It should be noted that this pollution system causes serious confusion in the respiratory system and needless to say, Cody 19 is the most affected by respiration.

Long-term effects
Scientists are now collecting data from other countries or regions such as Argentina, Belgium, California, France and Tunisia, where people are confined to their homes and the air pollution trend there is seen in China, Italy or Which direction resembles Spain?

The low volume of NO2 atmosphere does not mean that the air will be transparent because NASA recorded airborne pollution in Beijing in February.

Breathing better in 🇮🇹 — the irony of a respiratory illness

From the @ESA #Sentinel5P satellite, showing the first 10 weeks of 2020. pic.twitter.com/BFQk2wuech

In Paris too, these particles in the air on Friday recorded a moderate level of pollution, while NO2 is also in the atmosphere, although its population has been restricted to homes for 3 days.

Winston-Henri Povich said that pollution levels also depend on the weather ‘Some sources of pollution emissions, such as energy generation and energy use at the domestic level, will likely not decrease as more people are now living in homes. Will stay ‘.

But they say that levels, particles and carbon monoxide, are also expected to decline over time.

But what can these changes be expected to do to improve human health, as a recent study found that air pollution causes premature deaths of 8 million people each year?

Small particles in the air cause problems in the eyes and throat with difficulty breathing, in serious cases the risk of death for elderly people and asthma patients is when they are not treated properly.

Air pollution in the long term can also lead to respiratory or chronic heart disease or lung cancer.

Recent data have shown a decline of air pollution over northern Italy coinciding with a nationwide lockdown to prevent spread of the #coronavirus. This new map shows variation in NO2 emissions over China (Dec-Mar), as seen by @CopernicusEU #Sentinel5P 👉 https://t.co/nDtznxjLkM pic.twitter.com/qV0yS1d6X2

Restricting French physicians to homes provides them with two ways of protection, namely the risk of cod 19, while reducing traffic on roadways.

It is difficult to know now how much the global public will benefit from this reduction, Mahren says, in the coming weeks or months

In the wake of the US presidential election, 2020, the largest social media company, and other…
END_OF_DOCUMENT_TOKEN_TO_BE_REPLACED
0
0
0
Share
Science & Tech